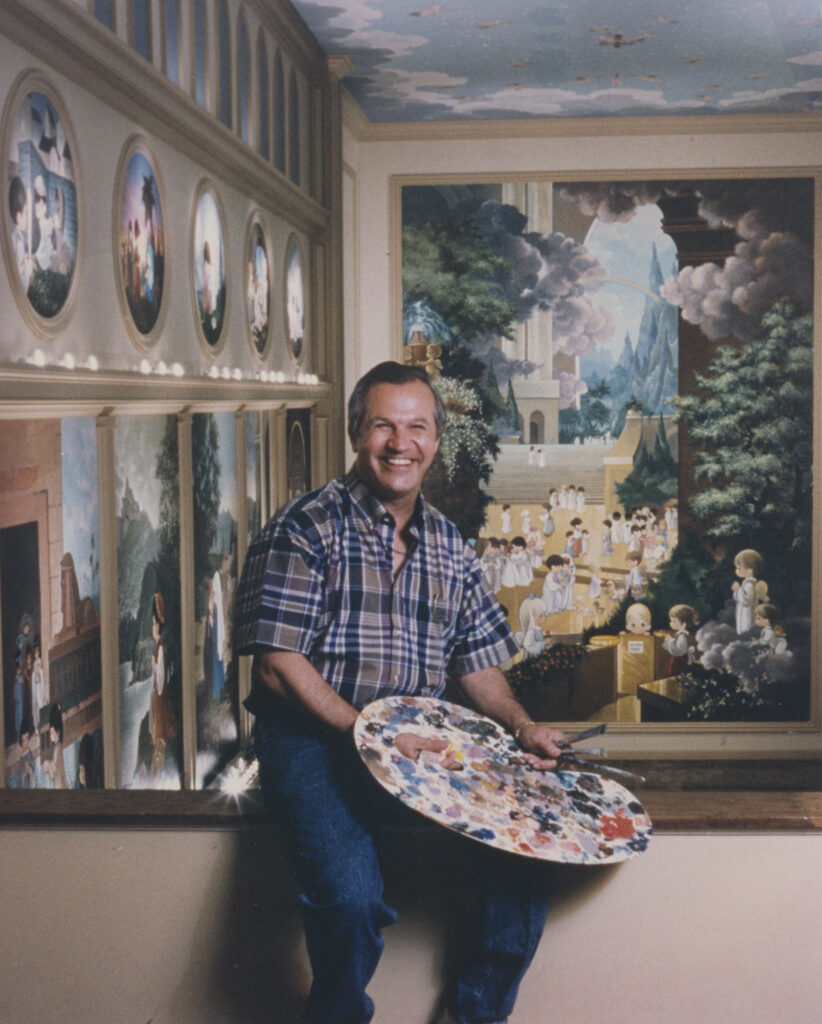 The Sanctuary walls are adorned with 79 murals depicting the Artist’s interpretation of the stories from the Bible and homages to his family and those who touched his life, including the largest and most well-known mural Hallelujah Square. The ceiling, a masterpiece in its own right, brings the number of hand-painted murals in the Sanctuary to 80.

A Map To The Murals

In order to tell His story inside the Chapel Sanctuary, Mr. Butcher separated the stories of the Bible by Old Testament and New Testament, with Hallelujah Square and the Chapel ceiling separating the works. 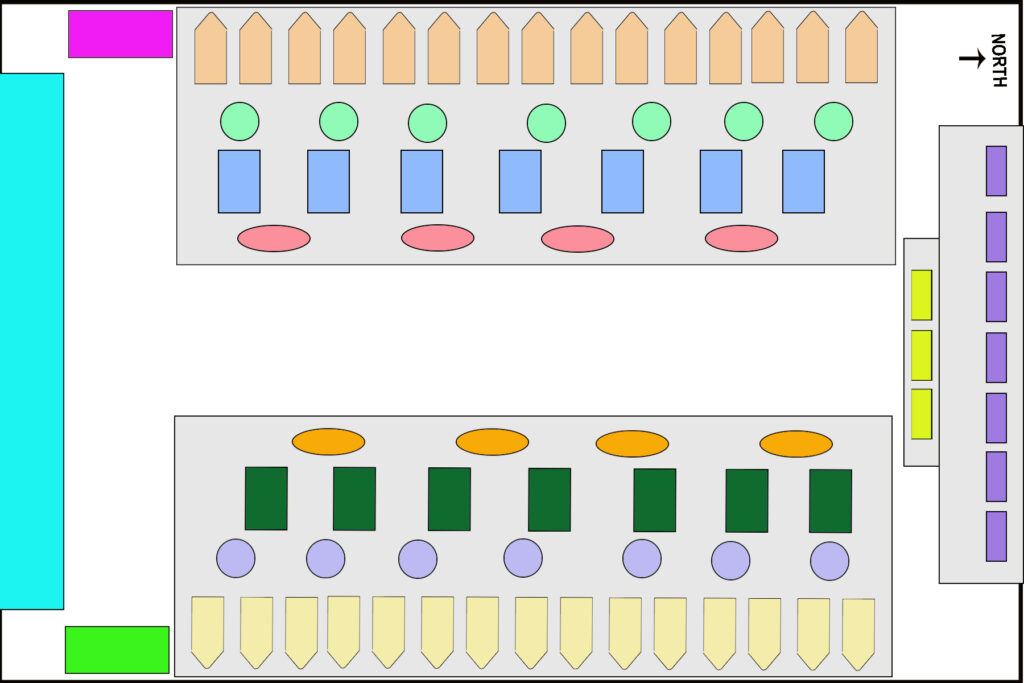 WEST WALL (from top to bottom)

Children Of The Bible #mural_cob

Tributes To The Arts #mural_tributes

EAST WALL (from top to bottom)

Find these murals on the Chapel map.

Will You Be Ready When Jesus Comes?#mural-ready 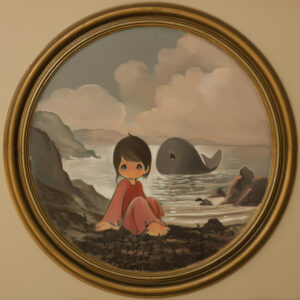 The stories of the Old Testament, depicted in the circular murals at the top of the East wall of the Sanctuary, include Adam and Eve, Daniel in the lion’s den, and Jonah and the whale.  Below the story murals are the Old Testament heroes. Esther, the queen who risked her life to enter the throne room of King Ahasuerus, was originally painted with blonde hair wearing a lush white gown. In 2009, Esther’s Plea was changed to portray her as a dark-haired brunette in a deep purple robe, which more accurately mirrors the image of this brave queen in Mr. Butcher’s mind. 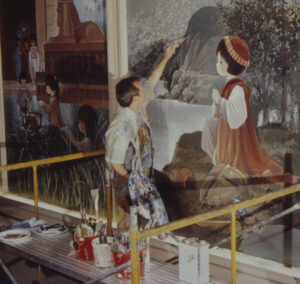 A Band Of Angels Plays On

Music is a universal language and so each member of the ethnically-diverse Band Of Angels plays a different instrument, but all with the melody of love and acceptance. The majority of the murals in the Sanctuary are hand-painted directly onto the sheetrock walls, with the exceptions being the Band Of Angels and revised Children Of The World series’. Each of the 15 Band Of Angels murals were painted at Mr. Butcher’s studio in the Philippines and transported to the U.S. in 2009. 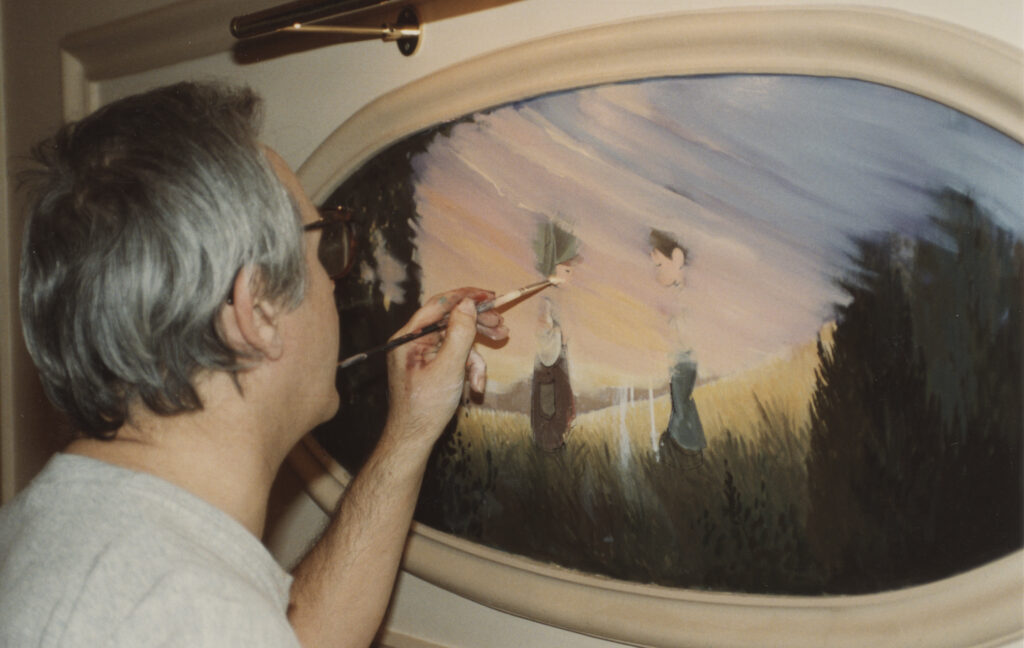 the Four Aspects Of The Christian Walk

As we believers follow the fundamentals of the Christian Walk for a faith-filled life, we fill ourselves with the Holy Spirit. While the Precious Moments Chapel has no congregation, it ministers to the thousands of guests who visit each year. Through the years, guests remark about the positive impact the Chapel has had on their life, and as a Christian, Mr. Butcher felt it incumbent upon him to share his gift of faith, love and inspiration with the world. The Christian Walk shows we belong to Him by faith, grace, and the good works we exemplify throughout our lives.

a Masterpiece of 16th Century Inspiration

One of the most beloved and renowned of all the Chapel murals is the angelic scene on the ceiling. Mr. Butcher’s first project after construction of the Chapel, it remains one of the most difficult and physically demanding for the artist to accomplish. Over two months, he painted 75 angels in their blue sky home all while lying on his back atop a scaffold lifted 32 feet in the air. 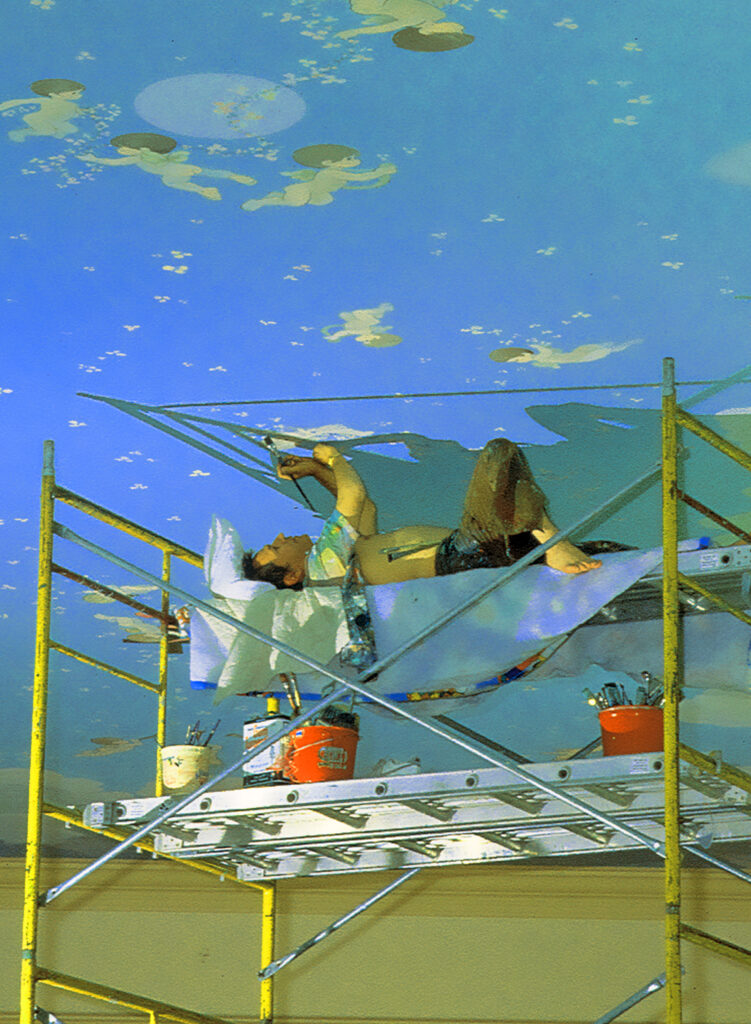 An Artist’s Work is Never Finished 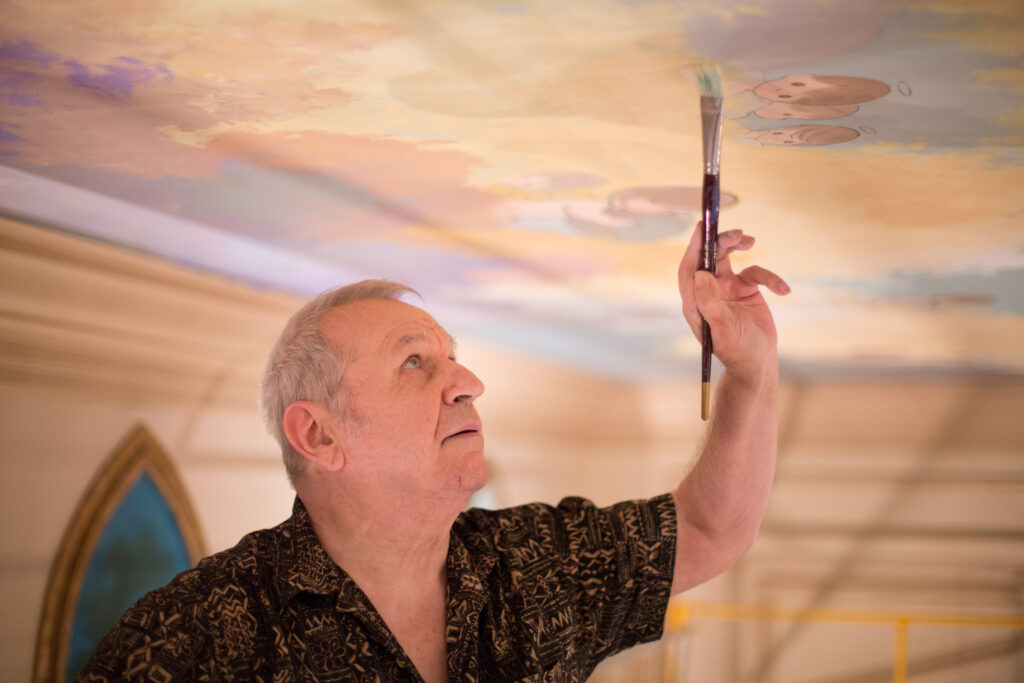 To celebrate the 25th anniversary of the Chapel in 2014, Mr. Butcher once again took brush to ceiling to change the original blue, white and grey clouds of the stunning mural. The new color palette, shades of lavender, grey, and violet are the colors Mr. Butcher claims he “felt in my heart”. At 75 years old, he used a mechanical lift instead of lying down on a wooden scaffold though he continued to pray for the strength and perseverance to continue with the journey. All the while, the little unfinished blue angel watched over his work.

During the journey after more than 9 hours painting, Mr. Butcher walked out of the Chapel, unsure he’d return or if he did return, unsure whether the trying task of painting the ceiling would ever be complete. After a restful sleep and prayer for the strength to continue, Mr. Butcher returned to the Sanctuary to find a black line-drawn angel peeking from behind a cloud. The angel, Mr. Butcher believes, was a reminder that had the Lord not intervened to give him strength to soldier on, he may have given up completely. After two months of painting, the Chapel ceiling mural was complete, save for the unfinished blue angel who continues to watch over the Chapel and all who enter.

An Unfinished Angel Watches Over Us All 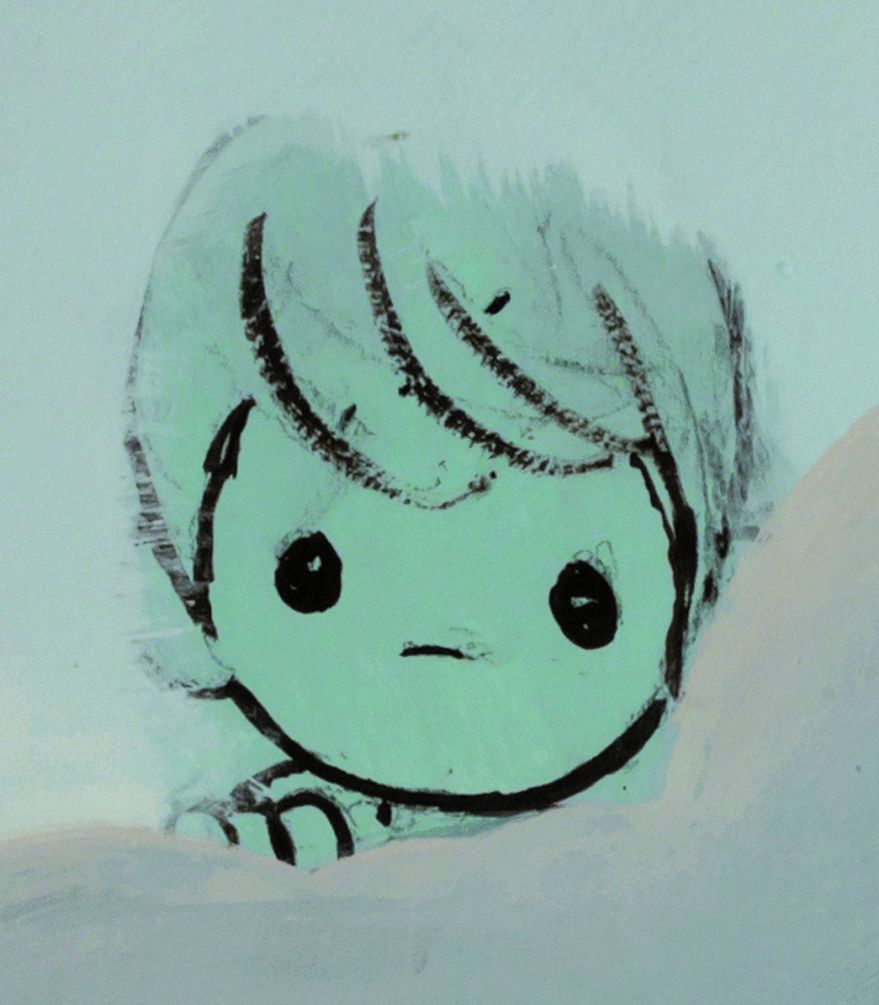 Tributes To The Arts

Originally painted in shades of red and white, the three Tributes to the Arts murals on the front side of the Sanctuary balcony, were repainted in shades of purple and burgundy in August 2017. The three murals represent Mr. Butcher’s answer to the questions:

How would the world have experienced beautiful and moving hymns, had it not been through the art of music?

How would the world have experienced inspirational murals and masterpieces, had it not been through the art of painting?

How would the world have experienced the wonderful stories in the Bible had it not been through the art of writing?

The mural of David, the Ministry of Music tells of God’s love through music. Bazalel, the Ministry of Painting was called upon by God to adorn the original Tabernacle with metal, timber, and precious metals. Paul, in writing some of the world’s most beautiful lessons while imprisoned in Rome, is the subject of the Ministry of Writing mural. 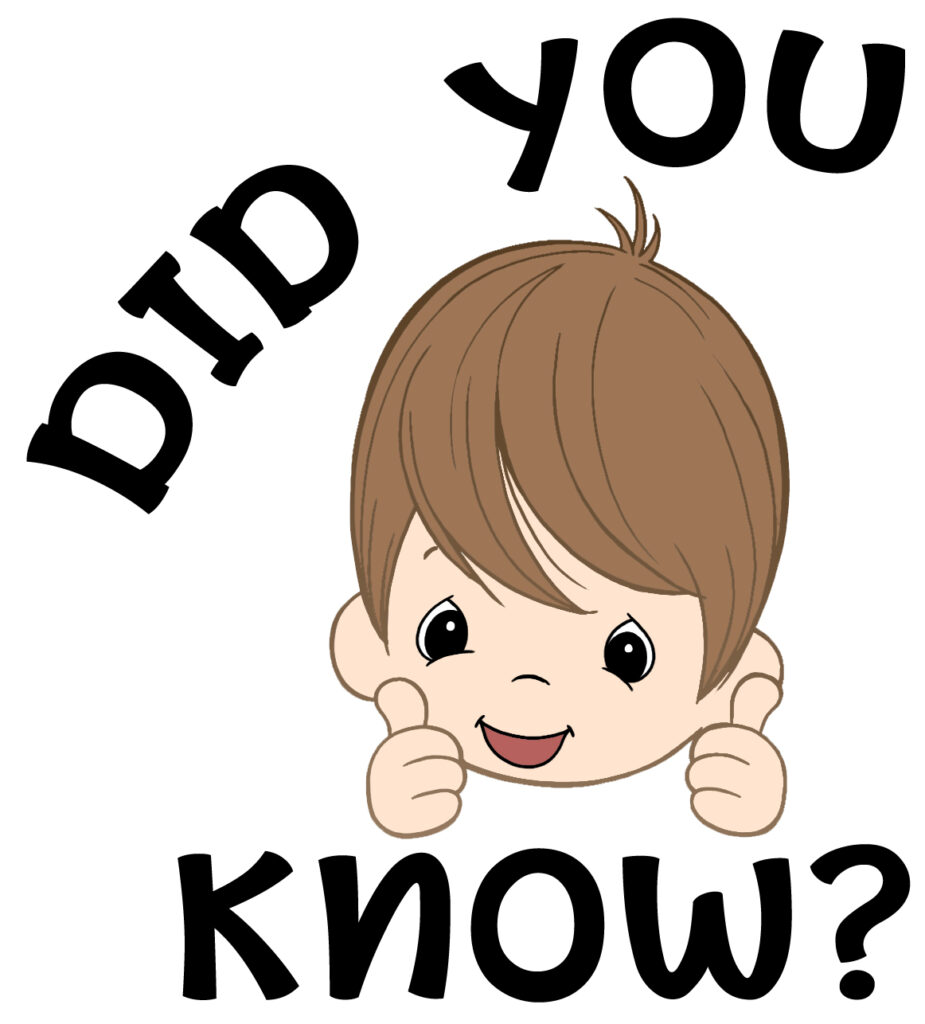 Inspired to include Chinese writing on the Tribute to Writing mural, Mr. Butcher asked his granddaughter Jasmine for assistance. Instead of asking her to write words for him to copy, he invited her to artfully write the Chinese word for love directly on the mural.
She also included a special message: “I Love Grandpa – Jasmine B.” signed with a heart.

When Humor and Reverence Combine

Displayed on the north wall of the balcony, the Seven Days of Creation murals are visible from most locations in the Sanctuary. Choosing a relaxed and cheerful approach to the Beginnings, Mr. Butcher’s humor and wit are remarkably evident in the murals which each highlight a single day’s event.

The circular shape murals on the west wall of the Sanctuary depict the Life of Christ as told in the New Testament. Following the story of the flight into Egypt, Jesus with Joseph in the carpentry shop, and onto the crucifixion and resurrection, Mr. Butcher painted each scene from a child’s point of view. In the scene of Three Wise Men, the two older men ride on full-size camels, while the third is a child riding on a young camel’s back. 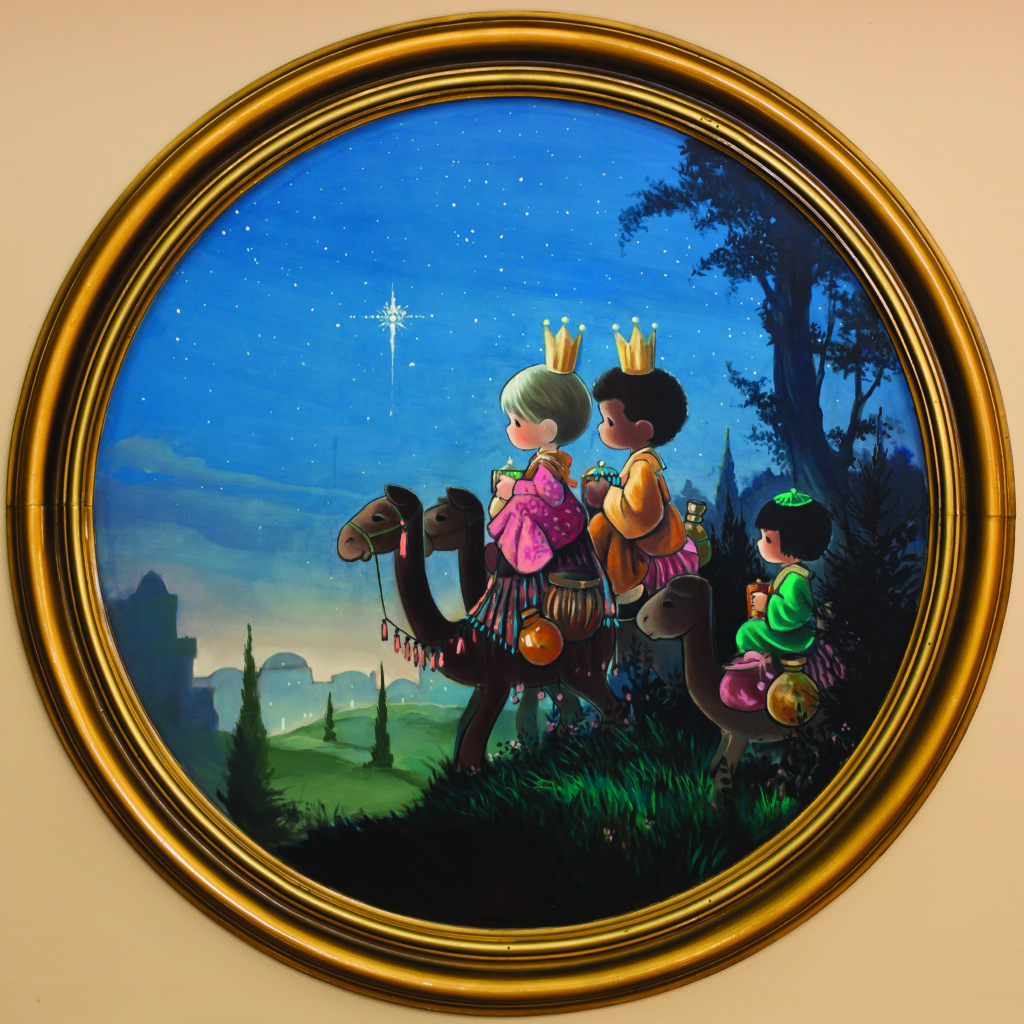 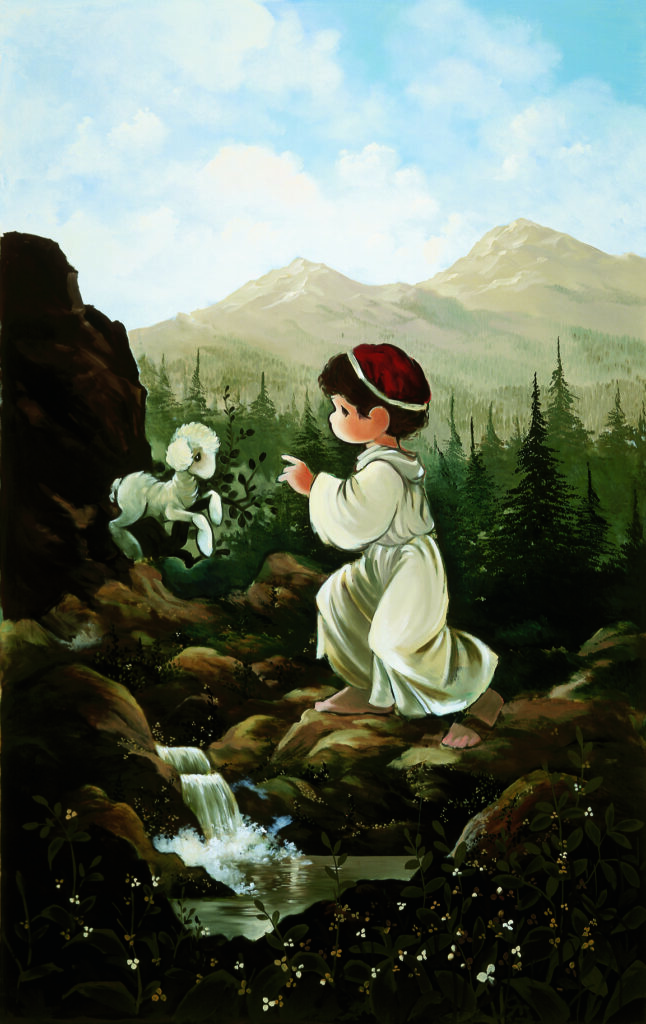 The Parables murals, the large rectangular murals displayed on the New Testament side of the Sanctuary, depict the seven lessons of Jesus as told in the Gospels. The Good Shepherd, who laid down his life for that of his flock, was initially painted wearing bright red robes. Nearly immediately after the mural was complete, Mr. Butcher realized the red was too stark, so he altered the color to white. After completing the mural for the second time, he saw that God’s work is truly never finished, as he inadvertently omitted the shepherd’s right sandal!

Children Of The Bible

Visitors to the Chapel prior to 2014 were treated to a very different rendition of the Children Of The Bible series, as the Artist recreated the murals at that time. Opting for a simplified technique, Mr. Butcher’s goal was to revise the paintings in a manner which allowed for viewers to clearly see each figure from a distance.  The series, painted in Mr. Butcher’s Carthage studio, were hung in the Chapel after having been temporarily displayed at ground-level to offer visitors a rare up-close look at the murals and to appreciate the artistry. 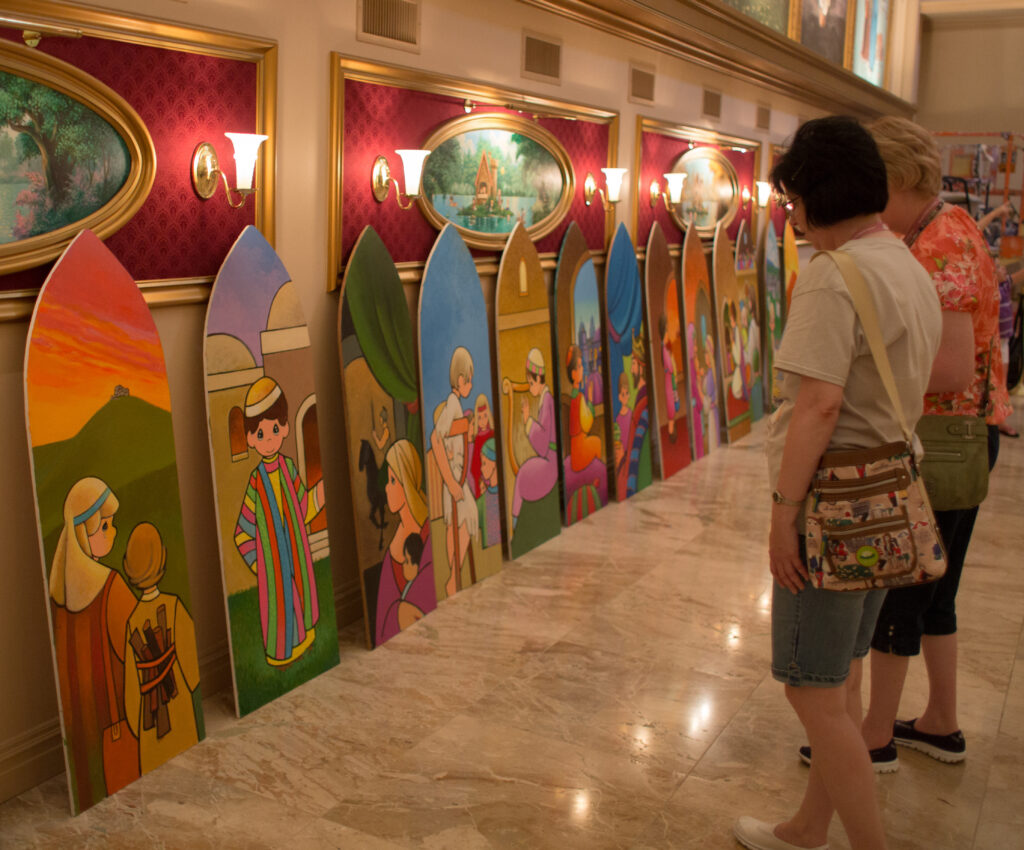 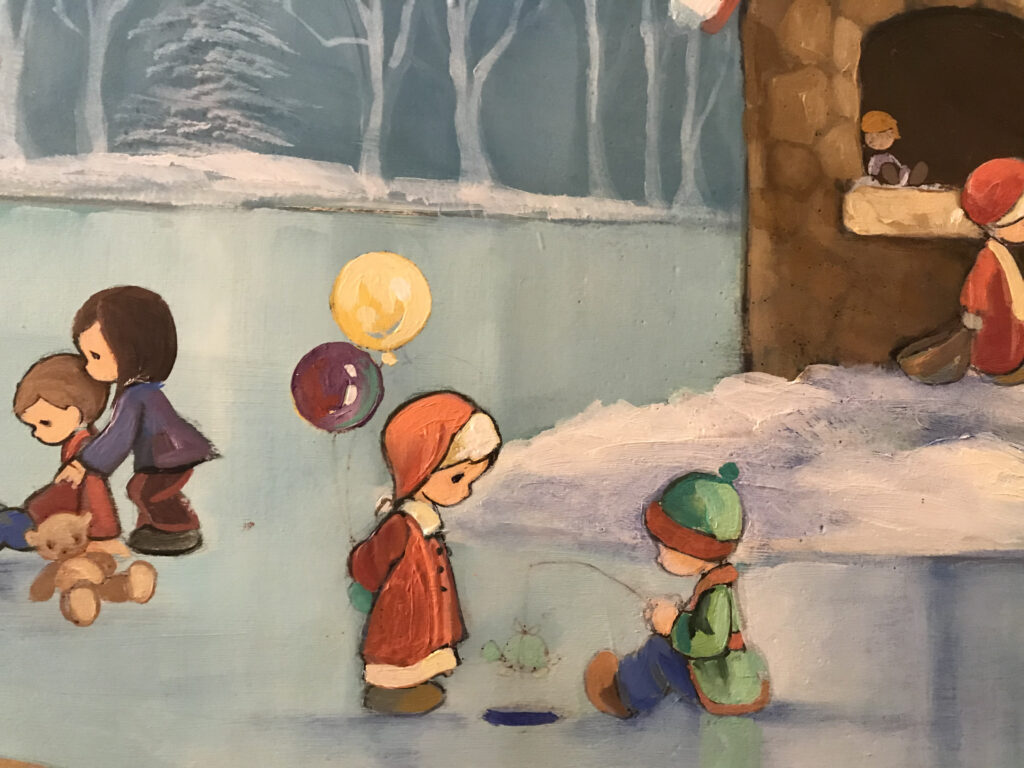 Mr. Butcher constructed the open-air playhouse on the back side of the property in Center Creek for his grandchildren to play in while he sketched and painted inside the Chapel. The playhouse and lively imaginations of his grandchildren inspired the Grandpa’s Island series of murals. Depicting the playhouse throughout the seasons, each contains subtle references to the grandchildren, including the girl with balloons (Tricia), the young boy with the telescope (Philip), and the boy on the rocking horse (Jordan). 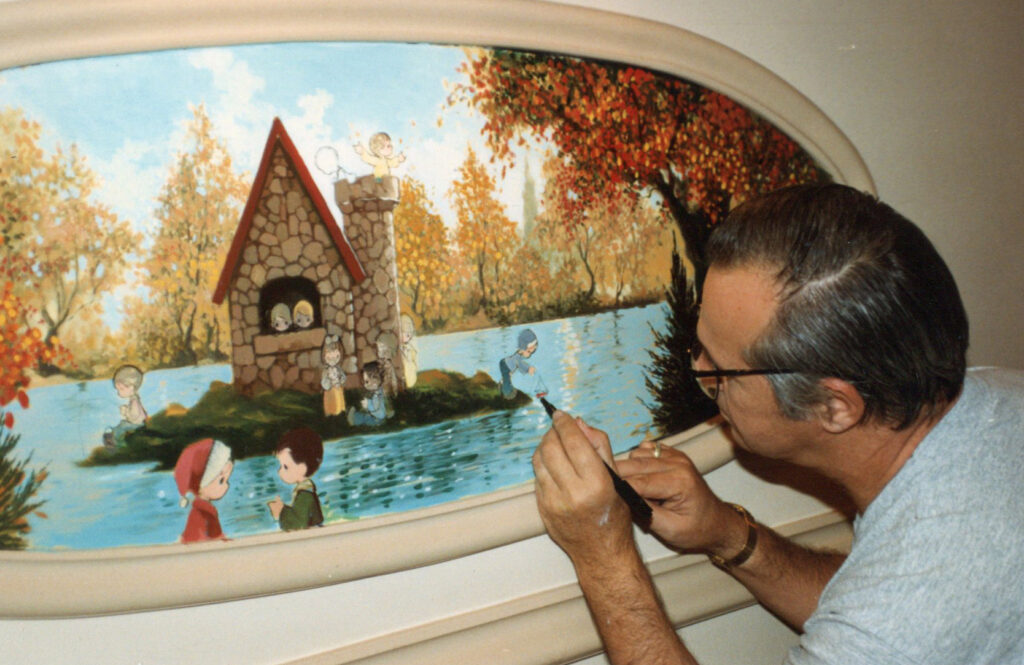 Behind the burgundy matte of the Grandpa’s Island murals are the hand-written “checklists” of Mr. Butcher’s grandchildren he wrote to ensure each of the 13 grandchildren were depicted in the series. While painting was in progress, Chapel guests were appalled someone would so maliciously deface the Chapel walls with writing and complained to tour guides on more than one occasion! The burgundy mattes were added in 1993 covering the checklist and preventing further “outrage”! 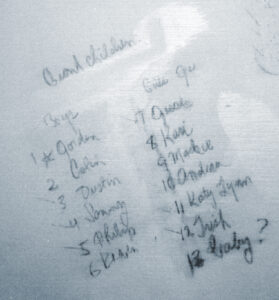 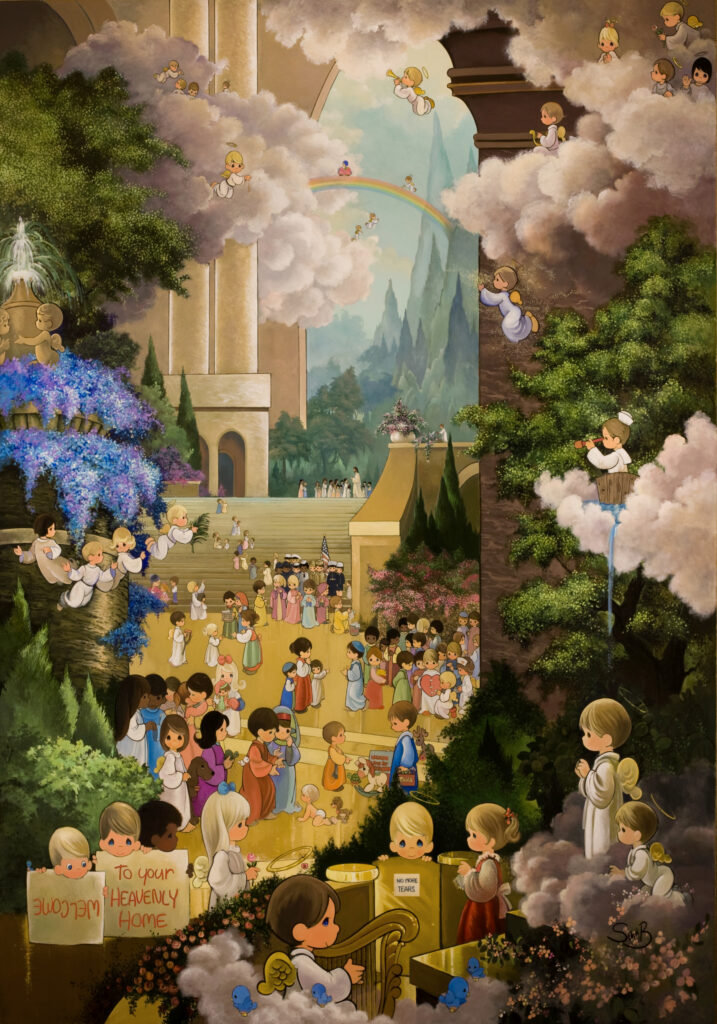 Perhaps the most well-known of all the murals in the Chapel is the magnificent Hallelujah Square. Depicting Heaven through the eyes of a child, this masterpiece pays tribute to 27 individuals who personally and professionally touched Mr. Butcher’s life. While being the largest vertical mural, it also carries the distinction of being the only “finished” mural in the Chapel.

The stories and photos of most individuals painted into the Hallelujah Square Trilogy are on display in the Tim Ryan Memorial Room.

Learn more about the Artist’s dedications.

The young man at the bottom of Promises of Everlasting Peace whistles his cares away, unsure of where his blessings come from and blissfully unaware that Shirley, Mercy and Goodness are following him, all the days of his life! 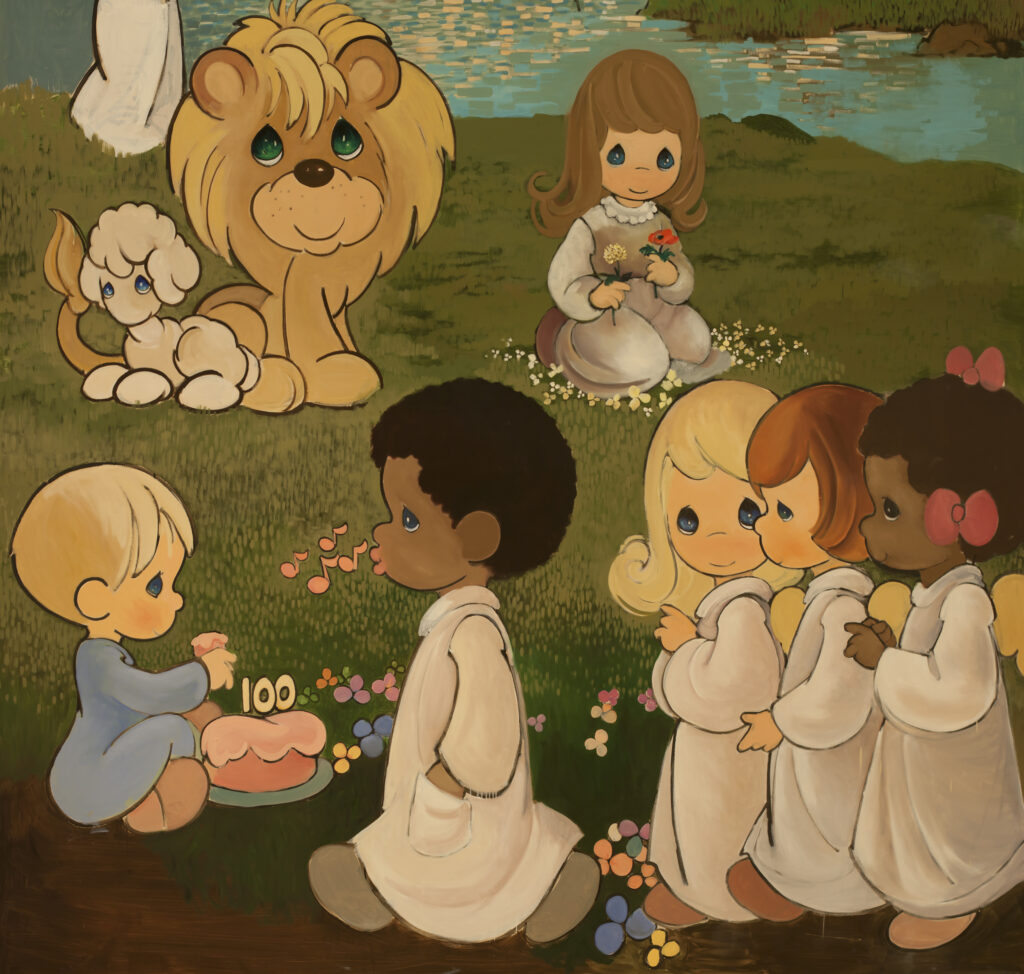 The Bridge To Eternal God

In 1998, Mr. Butcher was commissioned by a church in Illinois to create a mural entitled The Bridge To Eternal God. The resulting mural showcased a chapel with a bell tower rising from a lush green valley in representation of God. A pair of swans in the center symbolize the unity and loyalty we have for each other as Christians. Ahead of delivery in Spring 2001, the church divided and ultimately split. The members involved graciously offered the painting to remain on display in the Precious Moments Chapel where people could enjoy its beauty and symbolism. 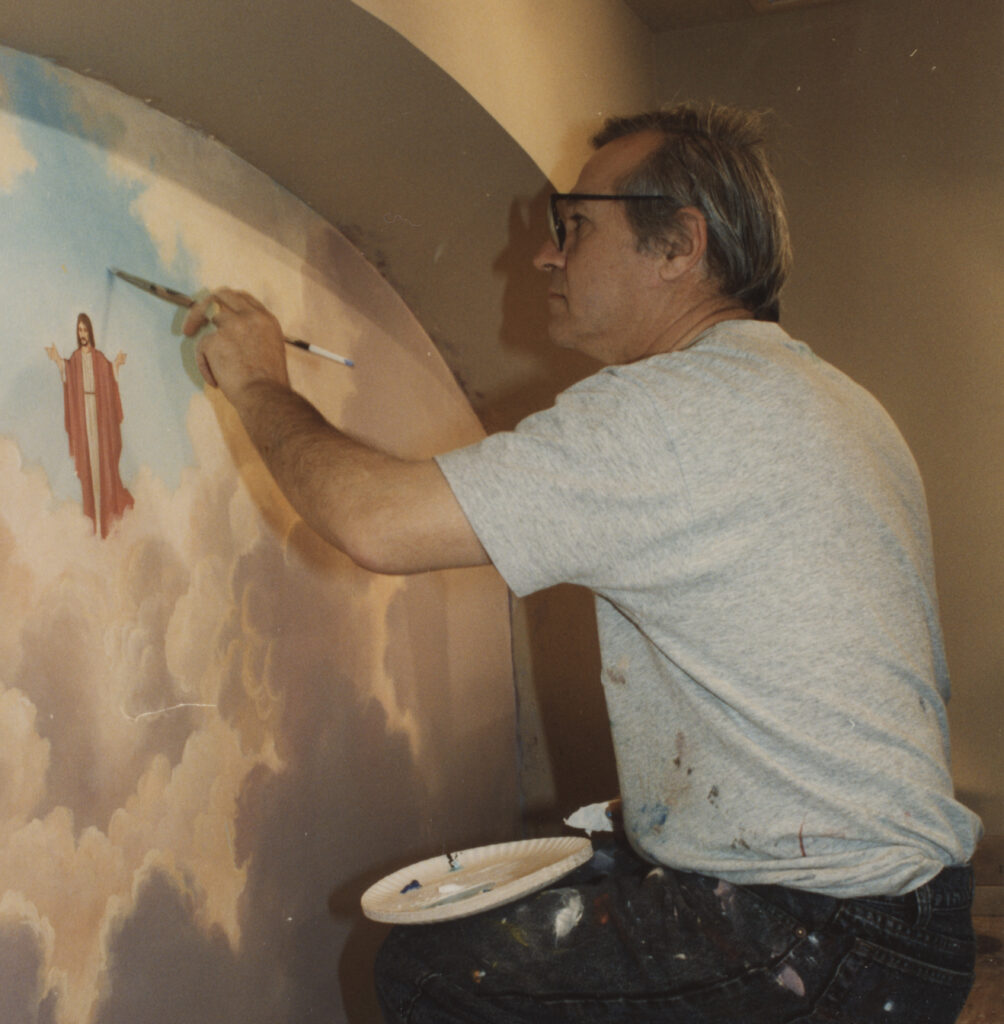 Will you Be Ready When Jesus Comes?

The back hallway of the Chapel features a picture window with the mural Will You Be Ready When Jesus Comes? featuring 22 9” figurines and 16 smaller figurines on a valley of clouds. Originally depicted in a red robe, Jesus was repainted in 2014 to wear a deep purple robe.

In September 1991, Mr. Butcher received the call every parent dreads – the one that informed him one of his children was gone. Dedicating a room in the Chapel to his son and painting a special mural in his honor, was Mr. Butcher’s way of working through his grief. With each brushstroke and every tear shed, Mr. Butcher says he felt closer to his son, Philip. Incorporated into the full-size wall mural inside Philip’s Room are some of Phil’s favorite things and mementos of his happiest times, including his childhood imaginary friend (the moose on the bookshelf) who forever took the blame for any of young Philip’s mischievous deeds!

Learn more about Mr. Butcher’s tribute to his son in Philip’s Room. 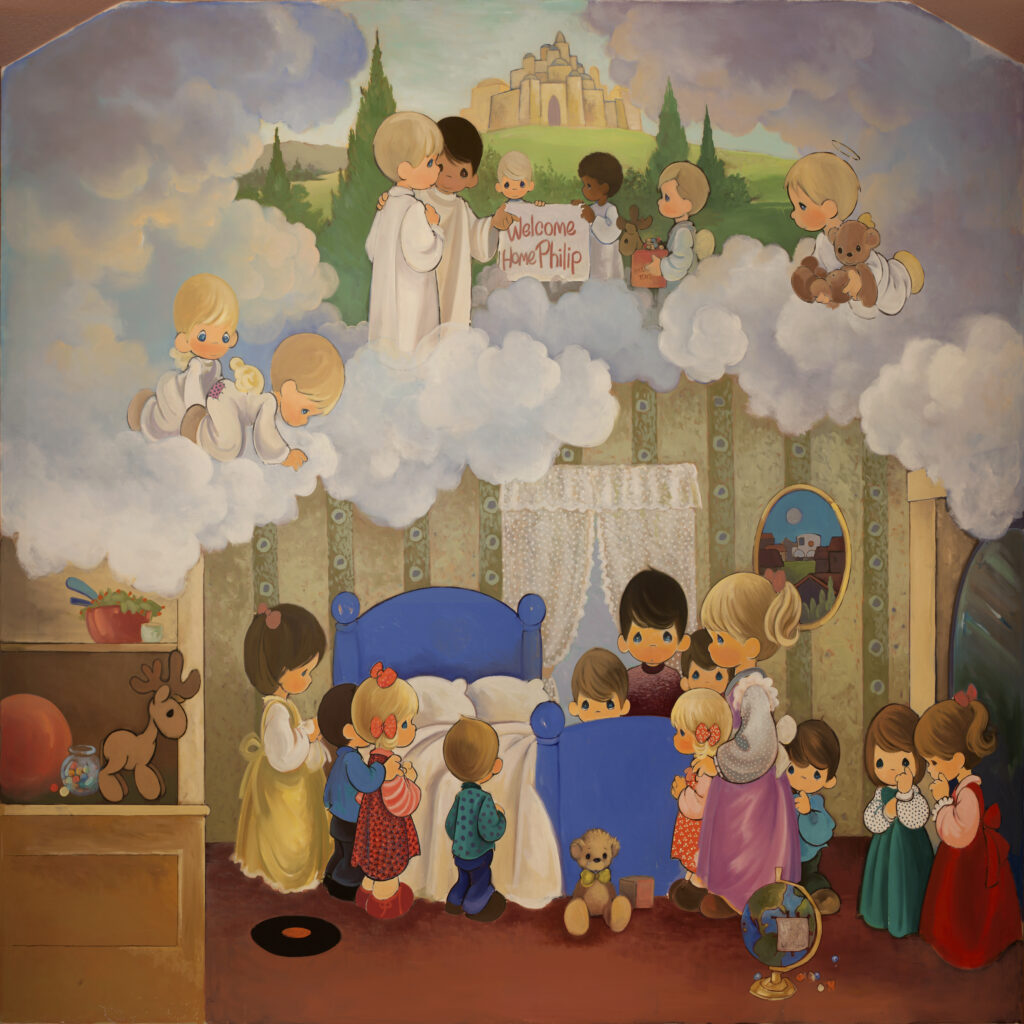 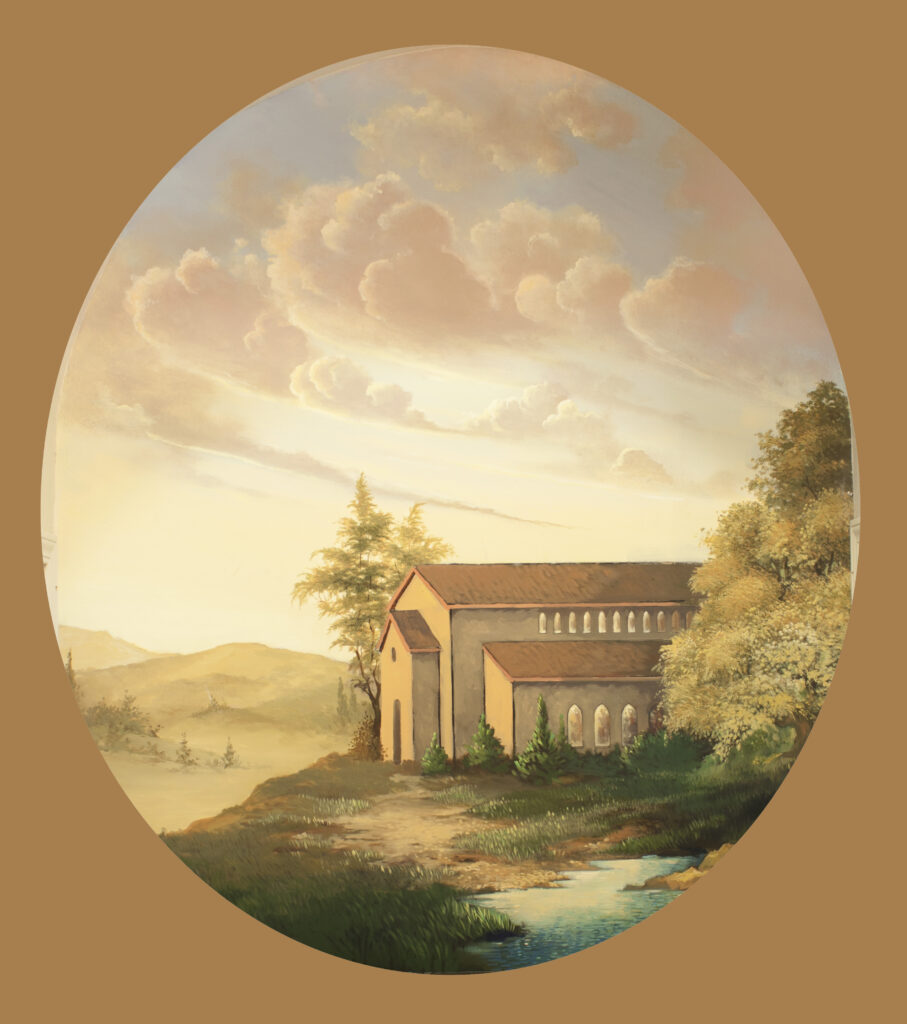 Tucked in an alcove at the rear of the Chapel outside the entrance to the Tim Ryan Memorial Room is an unassuming mural featuring a rare view of the Chapel exterior from the vantage point of Grandpa’s Island. The serene blue waters of Center Creek in the foreground can almost be heard just as the warmth of the sun streaming through wispy white clouds can nearly be felt.  A plaque at the base of the mural recites Numbers 6: 24-26. 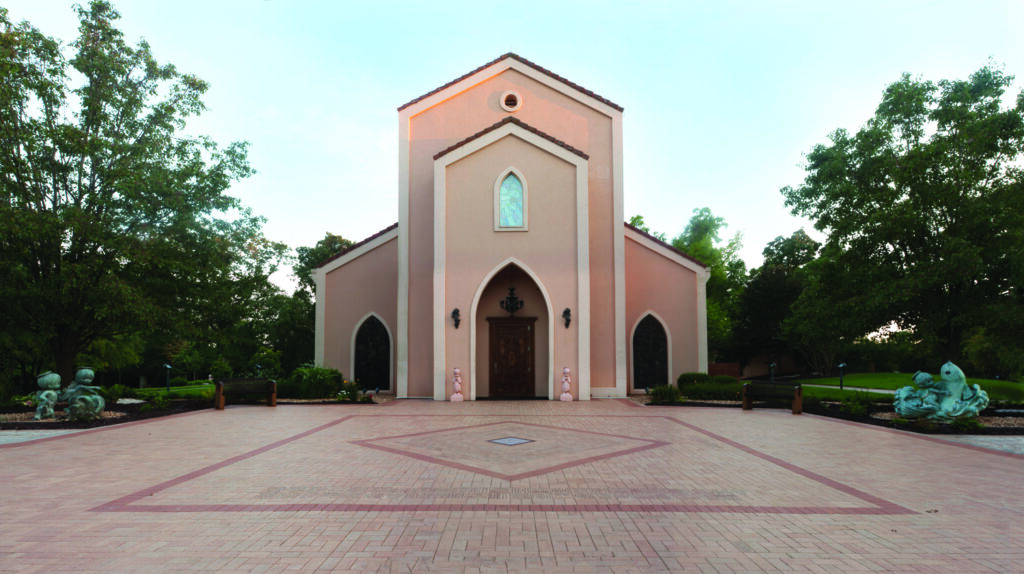 Your support matters to so many!

Learn more about the Precious Moments Foundation Mission and how to make a donation today.

Our Mission  | Make a Donation